Electronic braking devices allow three-phase induction motors to be braked wearfree and offer a rugged alternative to mechanical brakes, especially for high moments of inertia- or high switching frequencies. Application examples from the field will describe state-of-the-art technology as well as new developments in this area. 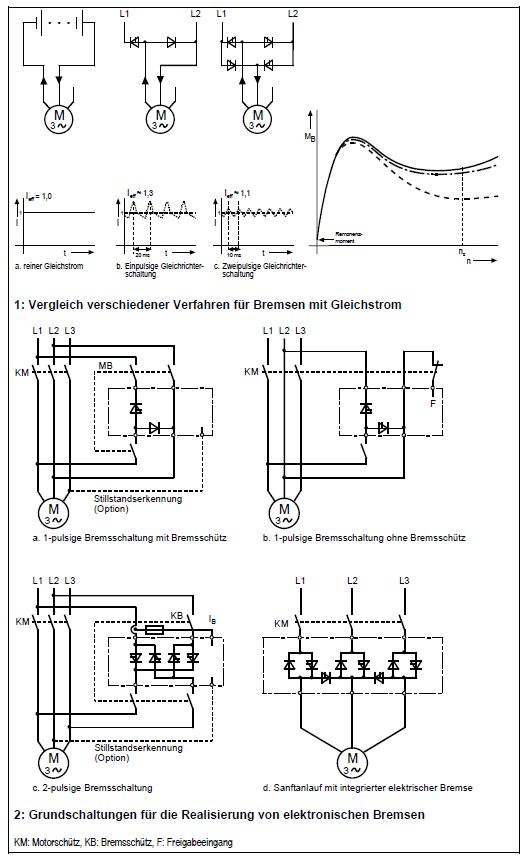 Three-phase induction motors are the most commonly used of all electric motors. Since frequency inverters have been available at a favorable price, three-phase motors are also being increasingly used for variable-speed applications instead of DC drives.Many machines and pieces of equipment have relatively high moments of inertia. When the machine or piece of equipment is powered-down, it continues to run for a correspondingly long time. Several examples from practice are listed in the table. In these examples, if the machine or piece of equipment is allowed to run-down in an uncontrolled fashion, this could represent potential danger for man or machine. For especially hazardous machinery, for instance, meat saws and woodworking machines, the appropriate regulatory bodies specify the maximum permissible braking times.The mechanical friction brake is the classic brake that is integrated in the motor in the form of a braking motor. For basic applications, and especially for applications with low braking energy, solutions such as these are extremely cost-effective and safe. However, as soon as the braking energy and the braking frequency exceed a certain limit, other solutions must be applied. The use of the existing drive motor as electrical brake has also widely established itself for such difficult applications. The possibilities of using the existing drive motor to brake are discussed in more detail in the following text.

2. Behavior of three-phase induction motors when braking with DC current

DThe behavior of a three-phase induction motor when braking with DC current is well documented e.g. [1],[2]. The three stator winding phases can be connected-up in many different configurations. When it comes to minimizing the amount of switching devices and wiring, then the circuit shown in Figs. 1a and 1b, with two phases connected in series, is almost exclusively used.The braking torque which can be achieved as a function of the speed results – in principle – in the usual speed/torque characteristic of an induction motor mirrored along the vertical straight lines through half the synchronous speed. The characteristic depends very heavily on the rotor design. At zero speed, theoretically, no braking torque is generated. In practice, there is a low braking torque due to remanence of the rotor core. For all of the braking circuits which inject a DC current into the rotor, the braking energy in the motor rotor is dissipated in the form of heat. If the braking effect of the load can be neglected, the energy loss when braking is theoretically the same as the energy loss when the motor starts. The motor should be appropriately dimensioned.

The simplest electronic braking circuit is the single-pulse rectifier circuit using a thyristor/diode combination together with an adjustable phase angle control (refer to Fig. 2a). A braking contactor is used to disconnect the braking circuit during normal motoring operation. When braking, a protection time of between 0.3…1.5 s is required depending on the motor size. A selectable timer stage limits the duration of the braking current to the predicted maximum braking time. Braking devices of this type are extremely compact – braking devices with extremely compact dimensions with the same width as a small contactor are available for motors up to 7.5 kW. These devices are simply snapped onto 35 mm DIN rails (refer to Fig. 6a).If the circuit illustrated in Fig. 2a (two phases connected in series) is used, this has the additional advantage that it is possible to fully electronically and automatically sense when the motor is at a standstill by monitoring the voltage in the third phase which does not have any connected device. As soon as the drive motor comes to a standstill, the braking current is electronically interrupted and, after the braking current has decayed, the braking contactor can be opened.Another development of the known single-pulse braking circuit is to use two thyristors instead of the thyristor/diode combination (refer to Fig. 2b). Operation without braking contactor is possible because the braking circuit is functionally disabled if the thyristors are not triggered. This version can be used to implement electronic braking for a minimum cost and also minimum space requirement in the control cabinet.The single-pulse braking circuits, described up until now, represent a very cost-effective solution, especially for lower power ratings. However, the current characteristic deviates significantly from pure DC current. This results in the following secondary effects:

A further development is to use current limiting which simplifies commissioning. The firing angle of the phase control is set at the device – i.e. the braking voltage is set. The actual braking current is obtained corresponding to the resistance in the braking circuit. However, this resistance depends very heavily on the size and dimensioning of the motor as well as also on the cabling. There is significant danger that an excessively high braking current could damage the braking device. Most customers do not have suitable measuring instruments to measure the braking current (DC current measurement).The maximum braking current of the device is automatically limited and commissioning significantly simplified using an integrated current limiting function. Further, a small braking device for braking larger motors with reduced braking torque can be used without any associated risk. 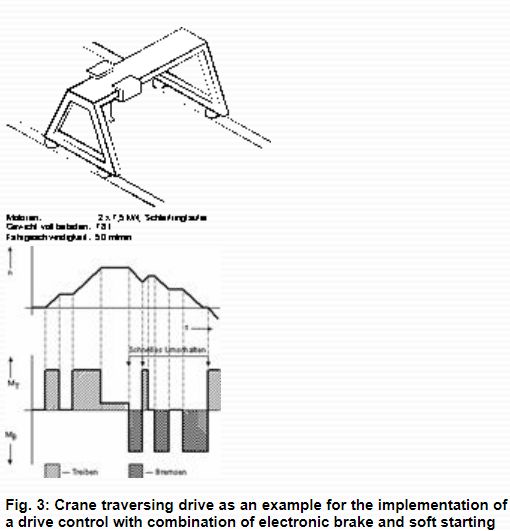 Devices which are used to softly and electronically start three-phase motors have advantages regarding the starting characteristic which can be selected and the reduced starting current. In recent years, several manufacturers have been offering devices which can start and brake three-phase motors. Most of these devices use an external braking contactor to initiate braking, whereby a brake switch-in delay of 0.3…1.5 s is provided depending on the motor size. After braking has been selected, these devices remain in the braking mode until the motor has reached a standstill. The braking contactor can only be safely opened after the current has decayed.A fully electronic technique (i.e. without braking contactor) is explained in the following text. This is used to implement electronic starting and braking. The basic structure of the associated circuit is shown in Fig. 2d. The three double arrangements of thyristor diodes represent the basic circuit of an electronic soft starting device. A part of this circuit, together with the two free-wheeling thyristors, located between the motor phases, forms a single-pulse direction-dependent braking circuit.

Using a control, synchronized with the line supply, it is possible to toggle between motoring and braking as many times as required. Typical changeover times for a 75 kW motor are: 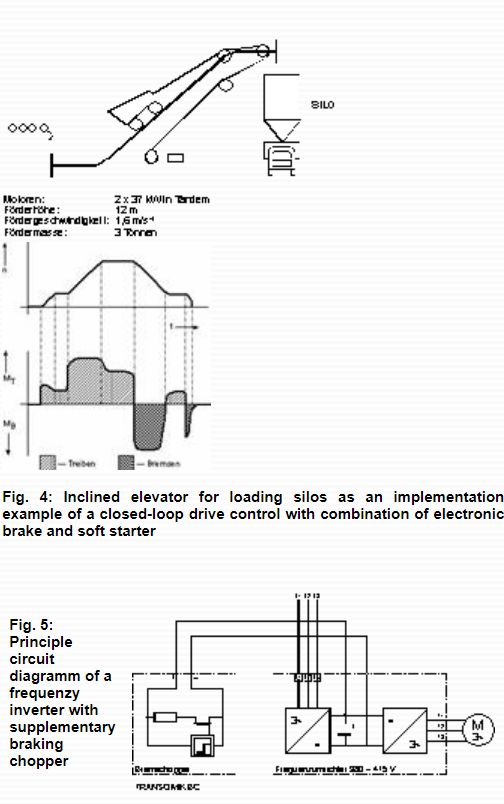 The circuit shown in Fig. 2d is admirably suited as basis of a drive with closed-loop speed control for starting, braking and positioning heavy machines and conveyor equipment independent of the load. The characteristic data of a system, equipped with this drive concept, is shown in Fig. 4. A typical device with combined braking and motoring functionality is illustrated in Fig. 6c. 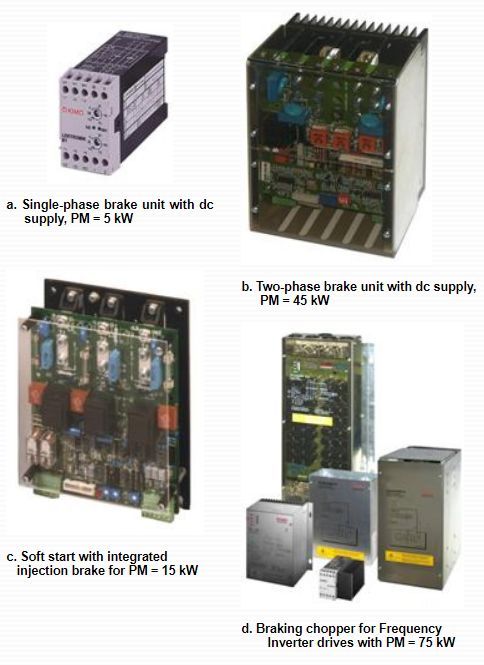 KIMO has developed a series of electronic braking choppers which can be especially used to subsequently increase the braking power of a frequency inverter. MOSFET and IGBT technology is used to switch the fixed braking resistor, which results in a simple and rugged design. Up until now, braking choppers have been implemented with a peak power of up to 1700 kW (refer to Fig. 6d).

Several wear-free electronic braking devices have been described for applications in the power range up to 200 kW. In so doing, the emphasis was placed on having a cost-effective design for rugged industrial use. The essential advantages of the braking devices described are